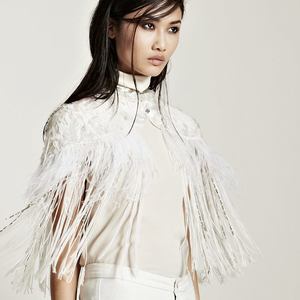 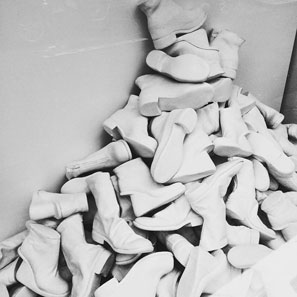 Product range. Menswear and womenswear, footwear, and accessories. Womenswear collections could be best described as contemporary romantic in style. Flowing chiffon dresses, tie-neck shirts, numerous variations on floral prints on a par with biker and bomber leather jackets. The dominating palette is that of demure colours. Menswear collections are rich in funny print T-shirts, striped shirts, cardigans, polo shirts, and other casual staples.

Originality. The lack of originality is traded off by decent make quality and very few blatantly bad taste items.

Chic. Pretty much the same as other mass market brands with their back to the 1970s 'revival movement', culottes, dress shirts, and oversized jumpers. French Connection do have a zeitgeisty flavour to them, which is basically all that is required of a mass market label to succeed.

Corporate history highlights. The company was founded back in 1972, and the first decade of its history saw nothing remarkable. French Connection, however, managed to survived the crisis of the 1980s and then came to prominence with their arresting advertising campaign.

In 1997, the company adopted the 'fcuk' brand. If one is to rely on the corporate mythology, this initialism first attracted attention when the company headquarters received a fax to its Hong Kong subsidiary headed 'FCHK to FCUK' (which stands for 'French Connection Hong Kong to French Connection United Kingdom').

Since then the name 'French Connection United Kingdom' wittily abbreviated as 'fcuk' became omnipresent and featured on T-shirts, banners and billboards, in advertising campaigns, lookbooks, and whatnot. The cryptoobscene anagram gave birth to quite a few puns cleverly used by the company in its campaigns including the telling 'fcuk fashion', 'fcuk used advertising', 'fcuk this', 'too busy to fcuk', 'fcuk her/him', 'ool as fcuk', 'fcuk off', you name it.

This sparkled a number of controversies with the posters forced to be pre-vetted by the regulating body, but it paid off tremendously and resulted in skyrocketing brand recognition and soaring profits. In 2004, the company even managed to launch a digital radio station 'fcuk fm'. As time passed, however, 'fcuk' became an old joke that has grown tiring. The 2006 'fcuk' advertising campaign for the first time turned a marketing disaster, and the company finally decided to return to more conventional marketing strategy.

French Connection stores in all cities and towns

Locations and opening hours of French Connection stores in London

We improve our store location database daily, but we’re not errorproof, so should you run into an incorrect location, please  report us about it
View all 70 store locations →