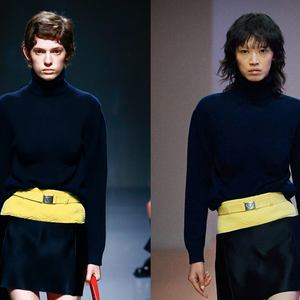 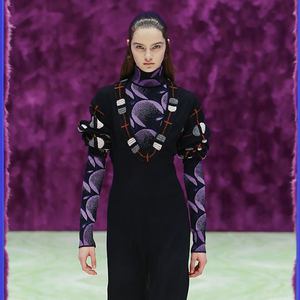 Product range. Variegated. Prada offers everything from handsome grey two-piece suits to oversized fur sleeve suit jackets to leopard print sheer cloaks to red-and-black coats in shearling lining and trim. The fashion house releases 4 collections annually, they are: Fall Read-to-Wear, Fall Menswear, Spring Read-to-Wear, and Spring Menswear. The handbags by Prada merit special notice: historically they were the first product sold under the Prada label and over the decade build a cult following as an iconic embodiment of chic.

Originality. In the recent years, designers at Prada have been busy reinventing the 1970s fashion. It was Miuccia Prada who started it all for the 1970s hype and was instrumental in flared jeans, leather coats, and floral print necktie blouses making an unlikely comeback. Unswerving in their commitment to the brand's DNA, Prada enjoys the status of one of the most recognizable fashion brands on the planet. Most of the collections by Prada feature contrasting palette, geometric pattern prints, signature silhouettes of the 1970s, and high-tech materials. Alongside Fendi, Prada pioneered multi-colour fur coats. The brand is also known for its massive frame minimal baroque eyewear that are impossible to be mistaken for anything else on the market.

Chic. Prada is one of the heritage fashion houses that have managed to preserve the key elements of their original styles having reinvented them in ways that look more up-to-date than the pieces by emerging brands. Perhaps, this is so thanks to the family-run nature of the Prada business that has remained unchallenged for more than a century.

Pricing. Apparel by Prada is exorbitantly priced. The more affordable shoes and handbags are above £500 and £800 respectively.

Corporate history highlights. The company was founded as Fratelli Prada by Mario Prada in 1913. Prada started out as a small shop that offered travel bags made of exotic leathers (think walrus and the like). Exotic materials and the status of 'Official Supplier to the Italian Royal Household' granted to Prada in 1919 attracted enough attention on the part of affluent customers which was instrumental in building the company's high-profile reputation. In 1958, the company was took over by Luisa Prada, a daughter of Mario Prada. She succeeded in cementing the status of Prada handbags as statement items and began to decorate them with crystals, rare woods, and turtle shells. Stunning as they were the bags failed to live up to the IT bag standards because they were hopelessly bulky.

It was not until 1977, when Prada found the keys to international success under the helm of Miuccia Prada, a granddaughter of the fashion house founder. In 1988, Miuccia Prada and Patrizio Bertelli, an Italian businessman, who joined her in 1978, launched women's prêt-a-porter. Even though the maiden collections was not a huge success, it was remarkable for its subdued colours and clean-cut designs. Eventually, the introduction of ready-to-wear collections helped Prada build a new customer base.

According to Miuccia Prada, who back in 1977 was a fully signed-up member of the Communist Party, held a PhD in Political science, and studied mime at Milan's Teatro Piccolo, initially she was not interested in fashion that much and took over the company only because she felt obligated: 'I had to have a lot of courage to do fashion because in theory it was the least feminist work possible. Of course, I liked it but I also wanted to do something more useful. When people think of fashion, they prefer to see the crazy side, the clichéd side, and actually I think that is wrong. Fashion is an important part of a woman's life. It's a question of aesthetics and that is in no way stupid or superficial'.

Trivia. Prada was among the first fashion powerhouses to enter and expand in Asian markets when the demand for luxury goods there skyrocketed. In 2011, this forward-looking move helped almost double Prada's annual profits.

Prada stores in all cities and towns

We improve our store location database daily, but we’re not errorproof, so should you run into an incorrect location, please  report us about it
View all 23 store locations → 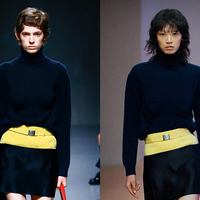 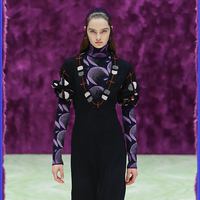 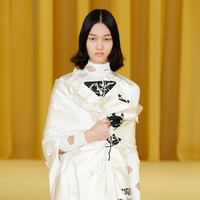 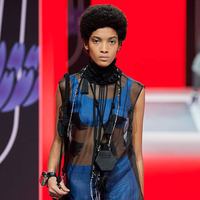 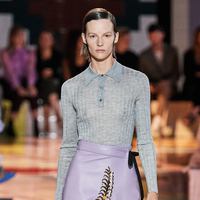 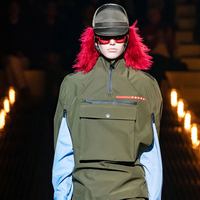