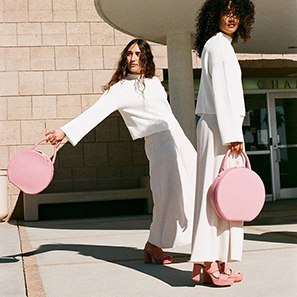 Originality: Manolo Blahnik is a stiletto specialist brand. Best-selling pumps by Manolo Blahnik come with heels that measure 105mm. Pairs with lower heels are also available, but certainly not those with 120mm ones. Experiments are relegated to collaborations: think Rihanna X Manolo Blahnik's kitschy Denim Desserts collection replete with sequin paillettes, and bright-orange or bright-pink waist-high satin boots produced in collaboration with Vetements.

Relevance: It would seem a stretch to think of Manolo Blahnik as an edgy brand, even though it has long been well-established and its fame shows no signs of abating anytime soon. The label's principal line collections are devoid of studs, glitter, and mind blowing prints, while some styles just look plain passé nowadays. Manolo Blahnik also entertains peculiar opinions on the platform shoe: "You ask if a woman can wear my shoes if she is not blessed with fine ankles? All is not lost! There are tricks to draw the eye; a bow at the ankle to divert the gaze and the cut over the toes. The woman I would refuse is the one who asks for platform shoes. If one of the designers I work with is having a platform-heeled moment, I say no, I just can't. The platform is the Frankenstein of footwear." The brand's collections have been immaculately free of platforms for decades, but the designer, once again haunted by his nightmarish shelleyan memories, confesses: "Sometimes I do horrible things that I hate. In the Seventies, I did huge platforms; they were like Frankenstein."

That said, Manolo Blahnik has been worshipped by the "Sex in the city" costume designers as well as Kate Moss, Rihanna and other celebs of this stature. This could be best explained by excellent craftsmanship, exquisite lasts and refined designs. Shoes by Manolo Blahnik lack eccentricity, but from the very first sight one knows for sure that they are a worthy investment.

Pricing: By the way, it takes no small fortune to own a pair of shoes by Manolo Blahnik to "dress like Carrie Bradshaw". A pair of shoes, sandals, or flats costs from €600 to €1,100.

Corporate history highlights: Manolo Blahnik was born, raised and homeschooled just south of Santa Cruz de la Palma, Canary Islands. The designer recollects his childhood memories: "Our property had no neighbours apart from my grandfather’s house. It was just bananas, the sea and us... a sort of paradise." That said, he frequently traveled with his family to Madrid and Paris, watched the films of Cocteau and Visconti, studied the paintings of Velazquez and El Greco, which was all instrumental for acquiring impeccable taste, finesse, and ingenuity. Just like with Christian Dior his parents hoped their son would become a diplomat, but after one semester at the University of Geneva he eventually dropped out and moved to Paris to study at École des Beaux-Arts and work part-time at a vintage clothing store.

His early efforts as a set designer were noticed by Diana Vreeland who encouraged him to pursue a career of the shoe designer. His maiden women's shoes collection received mixed press reviews because of poorly constructed flimsy heels, an inevitable evil of his lack of professional training as a craftsman. However, this proved no discouragement to Manolo who in 1973 opened his first namesake store in London and kept painstakingly honing his skills to perfection.

Manolo Blahnik stores in all cities and towns